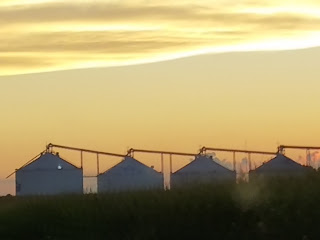 There's been lots of soybean harvesting happening in our county. The big fields on the corner are done. They stir up dust and pests.  Can not sit out , things bite. My daughter calls them "No see'ums"

My daughter Liz came over on Wednesday . She brought Lynzie , Max and Luke.  Ted and I wore masks, we sat outside. We watched the boys play hop-scotch and a game that Lynzie draws for them on driveways in chalk. They have lily pads to jump on, bear tracks to bear crawl and dinosaur tracks to stomp and roar.. The boys took their shoes off of course and started to get to quick. Luke falls down and bumps his head and I tell Lynzie, take him in and wash him up. She did not want to germ up the house, so sad. I told her, I will wipe things down. It's ok. Washed Luke and an ice pack on his noggin and he was good to go. 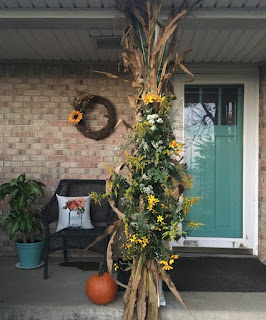 Speaking of Luke, I want to ask for prayers for our little fellow. He was to have polyps removed from his sinuses last week. His dr. got Covid...so Luke's surgery will be on the 30th. He had to has a covid test Yesterday. Lynzie tries to prepare him  for any medical procedures. She told him he was to get his nose and throat tickled. He said, "Not today mommy, that hurts."  Lynzie had to hold him down for the nurse to swab his nose. Poor Luke. The polyps are one of the things that can happen with Cystic Fibrosis.  So will you please send good thoughts and or prayers for our Luke.  We all truly appreciate your kindness.

Seems more places are opening up. Yet, my granddaughters' school has closed due to three positive covid cases. Go figure.  So please be safe . XO 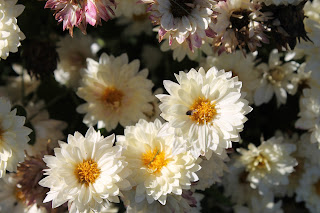 Oh by some miracle I found my old photos from some of my blogs.  These are all old pics. I may need help before I can ever load new ones.  This mums are back and do look much the same. 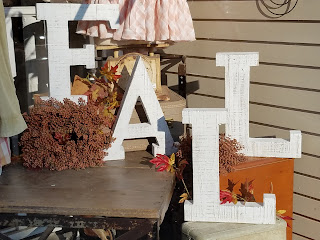 This was a cute display at Horton's here in town, a few tears back. 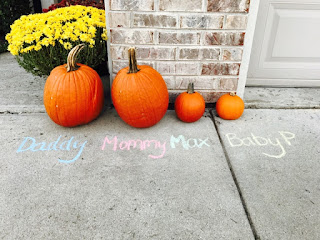 This was my granddaughter's decorations before Luke was born. She has a whole new layout this year. None are named. LOL.

I have struggled to make a bog today...try to go by Blogger's book...oh my gosh, why do they have to take us into space to achieve what they want.  I just could not get it right. I may never get it.

Wanted to tell all of you, that Ted is doing much better getting his walking routine in and the P.T. exercises for his shoulder.  We both have dr  appts coming up in the next week. Then I am scheduling my cataract surgery.  My sister got hers done and did very well.

Wishing all of you well. Stay safe. Praying for all . XO 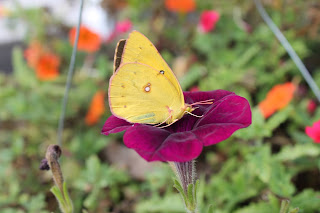 Caught this butterfly on a bloom.  Many flowers have withered away.   You see one here and there hanging on. We had a powerful rain Monday late afternoon and over night. Had 5 inches of rain here and none in the next county.  We needed it. But we also lost power for almost two hours. With that kind of rain, you need sump pumps to work. Thankfully we were so dry here , just as the power came back on the pumps started pumping and no wet basement. Hooray. 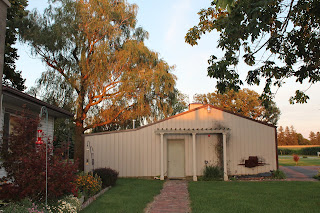 My goodness we had some days that were just perfect. Low humidity, could open windows and air out the house. I love when I can do this. 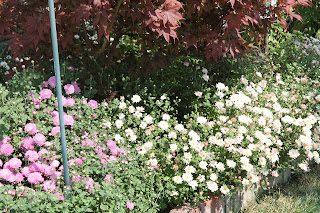 The mums are blooming already.  Hope the bees get to work them over.   I have not seen many honey bees , but other kinds, not so sure what they are .
Ted got to see the orthopedic doctor on Tuesday. He has tendonitis and got a cortisone shot. His shoulder is better , will have P.T. next Wednesday.  But thankful it was not a torn rotator cuff, as the N.P. said.  As soon as Ted had relief from his shoulder , I could see the difference in his outlook.  We are hanging on. Thank you everyone for all the good prayers and wishes. You are in my thoughts and prayers. I am not sure if I will be able to blog...because honestly I have not idea about the new blogger.  Please everyone stay safe. XO
Posted by Susie at 7:56 AM 62 comments: 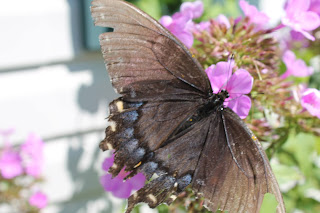 I feel our summer is going , as this fading butterfly seems to be trying to hang on a while longer.  Even though he may be weary he is still pretty to see flitting about.
The news here has been good for Ted and I. The Cancer doctor's office finally called yesterday . The report is , No more chemo. I was sitting on the porch when Ted got that call. He came out to tell me. We were standing on the porch hugging and crying, for a few minutes.  It's been a long journey, not yet over, but not so scary now. We are looking forward to Ted getting his strength back. We are praying for that.
I told you all about the "Go in the box, screening  " I had to save time. Missy from 'This and That " blog , told me I might have to still be scoped for polyps....So I had that done on the 13th of this month. I got the results of the biopsy from polyps that were removed . It came in the mail from the surgeon. The polyps were not cancer, but I should be scoped again in a few years.  Thank you Missy for that advise.
So for now, Ted and I are happy. He goes tomorrow for a final check up with the cancer N.P. , at Riverview Hospital  . His next bone marrow clinic visit in in a couple months.  It feels nice to relax .
Thank you everyone for your prayers and good wishes. We are so grateful. XO 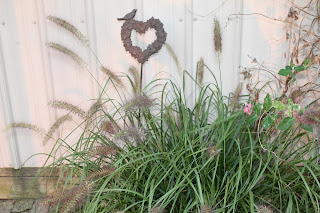 This past Monday, Tuesday , and Wednesday, Ted had his maintenance chemo. He gets it 3 days and a lower dose for the last 4 rounds. He spoke with the cancer doctor on the 31st of July.  Dr. Birhiray (oncologist) told Ted to have the bone marrow ( IBMT) doctors call him and they could talk about Ted not having any more chemo. Giving us such hope. 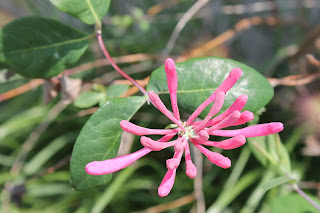 Yesterday , we drove to the IBMT clinic south of Indy. We take some back roads which takes a bit longer....but people are not driving 80 miles an hour, like on the interstate. 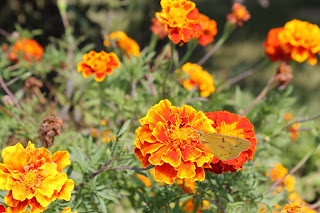 Ted masked up and went in the clinic and I stayed in the car. It wasn't boiling hot, but plenty warm. I moved the car to a bit of shade when it became an empty parking spot. I did puzzles, played on the phone, watched people. Even watched goldfinches in the trees. 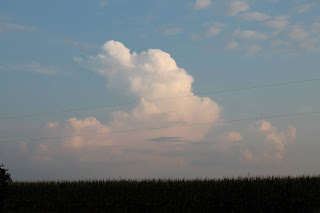 Ted came out 1 hour and 40 minutes later.  He was  somewhat excited. Saying the dr called the oncologist and left word for them to call and conference.  Dr. Akard told Ted  he would call to let him know about stopping chemo. It truly sounds as if Ted has had his total rounds. Ted did get another round of baby shots. We go back in November(3 months away) His labs were decent even after having chemo the first three days of this week.
The only thing  new about my sister Jeanie ,  she is sitting outside and visiting with her neighbors and our sister Brenda.  Improving. God is good.
Thank you, thank you, thank you . Your kind words, wishes and prayers have helped us get this far.  We are so grateful.  Enjoy the weekend and please stay safe. XO
Posted by Susie at 11:04 AM 95 comments: 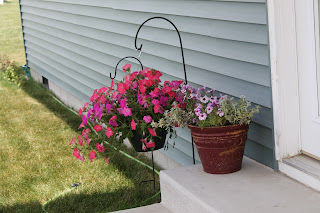 Showing my daughters backdoor plants.   She changes colors every year. 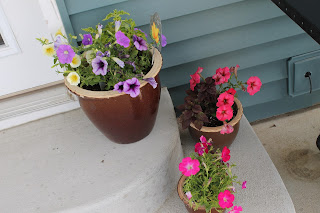 I love petunias, of any color.  They are not heavy with fragrance but I can smell them as I sit on the steps. 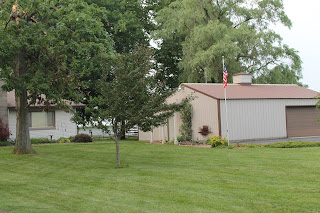 Ted's been mowing wearing a special mask, and trying to keep the lawn in shape.  It is looking better. Ted had three days of chemo this week.  Today was the 3rd day. Tomorrow we go to the IBMT clinic and see the bone marrow drs.  Ted is hoping they will say no more chemo. Of course it depends on the reading of his "Who's Who"  to see how much of his bone marrow is donor. Last time it was 98. 3 % ,which is very good.
My sister Jeanie is home and feeling better. Although her feet did swell a bit. Her thigh is bruised badly from the heart dr placing a catheter into her groin area to put a stent in her heart. .I went to see her , wore my mask , stayed 6ft apart.  She has a long road ahead of her. Getting used to meds and changing meds, as they do at times. She will see the heart dr again in a month.  I want to thank all of you for all your kind words, wishes and prayers. You are the best.  Stay safe. XO
Posted by Susie at 3:20 PM 23 comments: 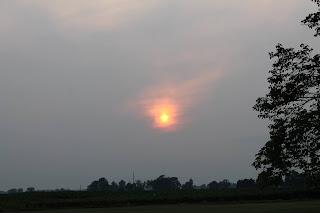 When we can't go anywhere and we get bored of staying put...we take drives. 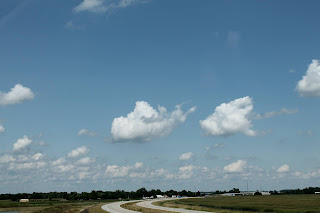 This is a pretty summer sky, blue with puffy white clouds.. 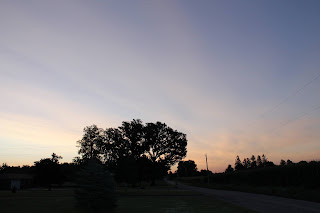 We don't normally drive anywhere after dark.  I miss family, friends, and townspeople. I like to see people out and about ...but not in crowds and certainly not without masks for a few more weeks. Praying it won't be months.
This is a short up date on my sister Jeanie. She was taken from the Saxony hospital she went to on Thursday and sent to Methodist. They did surgery late yesterday afternoon. She had an ulcer on her  artery ( I do not know what that means). But they put a stent in and cleaned up the ulcer. She will be staying in the hospital for the weekend maybe a bit longer.  The drs. told Jeanie's daughter , that she did very well.Thank you for your prayers my friends.  I believe  that there is great power in prayer and I am so thankful.  Thankful  to all of you who wished Jeanie well, thought good things for her and the prayers. Please stay safe. XO
Posted by Susie at 5:43 AM 65 comments: