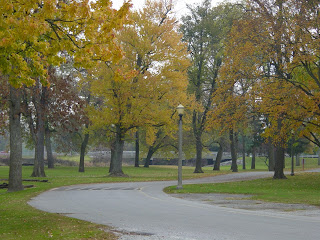 Yesterday  I had to go to the grocery, I stopped off at the park. I just wanted to get some pretty fall pictures. I will tell you this story that  happened while I was there at the park 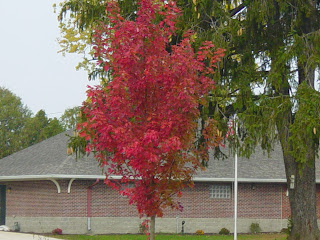 I was taking this photo of this tree, when I heard many rounds of gunfire. I went back to my car. I heard more rounds and it was coming from the direction of our school. Our school is just across from the park. I was instantly sick to my stomach.  You just think, no a shooting could never happen in our schools. But so many have happened in many towns. No one wants to automatically think that. But I did...I was so taken aback by the sounds of the gunfire. So many rounds of it. 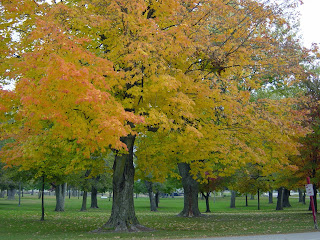 I got in my car and drove to where the park supervisor was helping on a project. I ask him had he heard that gunfire. He said , "what gunfire?" I told him I heard it twice and it seemed to be in the direction of our school. He said, "Oh I hope not." The fellow with him said it's probably  the shooting range for the police. Thank you God was all I could think at that moment. 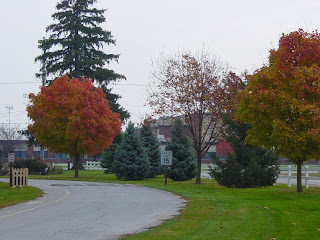 This is our school you can see on the way out of the park. The shooting range that I know about is about 2 miles from town. Maybe they need it to be elsewhere.  I never dreamed you could hear gun fire in town from that range. I will tell all of you this...I had to pull over and park....then I cried. I cried for the way the world has changed.  I know I would never have thought about a shooting at any school before these past few years. That incident made me so emotional. Some of you will think "she's crazy", some of you might understand, but I truly hope none of you feel like I did at that time when I heard the gunfire.
Posted by Susie at 6:55 AM