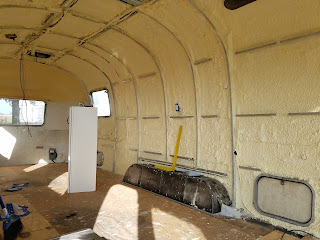 Ted 's sister Dorothy bought this Airstream camper. This is after Mic  (Ted's brother)  put the blown in insulation throughout. 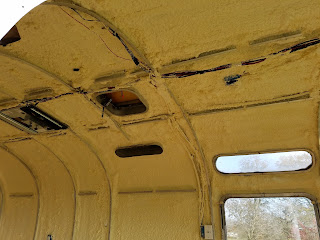 There's wiring, insulation and power boxes, and  nothing else in this camper , when Ted and Mic brought it to our property. 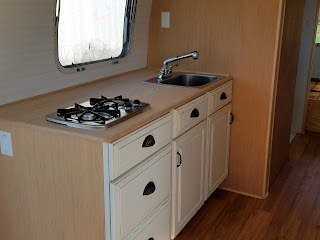 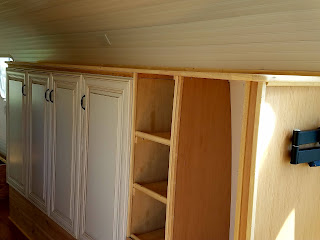 This is opposite the kitchen and bathroom, tall cabinets shelves and a cubby spot for the camper fridge, that is at Dorothy's house.  There's a shelf on top that Ted custom made  Ted made all the walls ,counters, and shelves  Dorothy had the old white kitchen cabinets and Ted had to fit them into the curved sides of an airstream camper.  Nothing is square or plumb in one of these.  Making double  and triple measuring a must. The black thingy on the side is for mounting a TV. 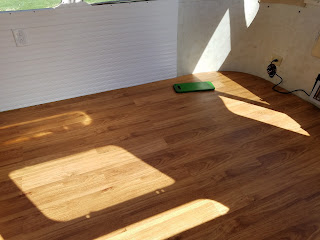 Ted got the flooring in this week. Took many more boxes than his sister first was told by the big store helper.  She had the right measurements. 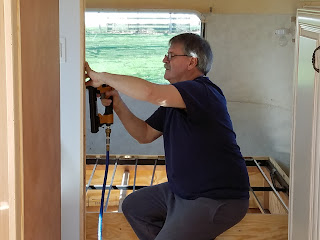 Here's Ted finishing the corners with trim boards.  He is perched on the edge of the bed frame. 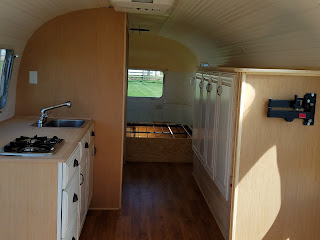 Looking toward the back of the trailer.  The staining of the wood isn't done yet, that's Dorothy's job. 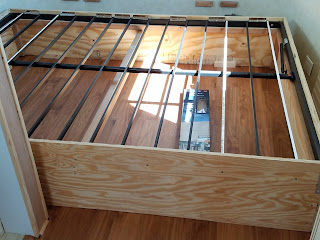 This is the bedframe. The grid will hold a mattress . There's  hydraulic  lifts on the sides , so the bed will tilt and things can be stored under it. 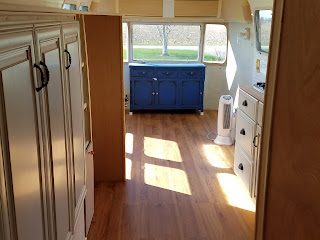 Looking toward the front , which will be the sitting area. Dorothy says she will have two recliners , one on each side of the blue console cabinet. 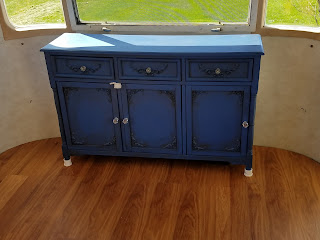 I actually love this little piece. Ted cut a hole in the back , so it slips over the battery box. He made the legs to fit into holders, so it can be moved when need be...not on it's own as you are going down the road. LOL 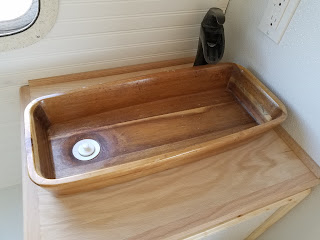 Another favorite piece is this little bamboo sink on the vanity, that Dorothy found on line.  I think I said it was teak in one of my post (Sorry).

Here is Ted's brother Mic hauling the camper away yesterday.  He took it to his wielding shop two towns to the west from us. He will be making a bracket for the LP tanks. Then He will take it to Dorothy's house and she will be doing painting and staining...then the decorating.  I picture it as her she-shed...when she needs to escape.  This has been a long process....as there were many winter days when nothing could be done.  Ted said he did not mind helping his sister ....but never again !!!  :):) Now to get the grass to grow where the trailer sat for so long.
Hope you are all having a nice weekend. It's seems to be spring here for now. XO
Posted by Susie at 7:28 AM