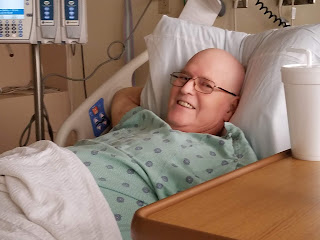 Ted Is finally well enough, that he is coming home. Not sure for how long.  But it will be so nice to see him everyday.  He is over his cdef  or cdif. , However it's spelled.  But I will be taking precautions anyways.  I am praying Ted will be able to get his strength and spirits back fully.  He had a horrible time recovering from the second chemo round.  He may have one to go. It will all depend on the cancer doctor and Ted's blood work. 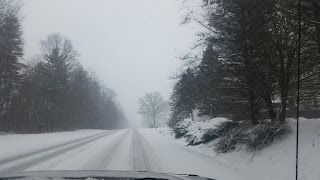 This is the weather we had on Saturday. It iced, sleeted, and snowed. Power flickered on and off many times. Many were without power for some time.  So scary and dangerous.. 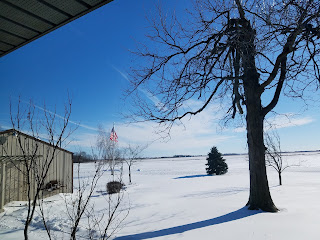 Sunday the sun was old, but it was bitter cold and today is even colder.  The sunshine lifts my spirits even in this cold.  It is sunny today and I want to enjoy that sweet glow. 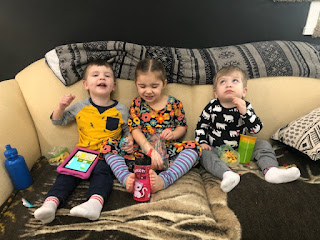 On Saturday Layla had her cousins over for the night, as the boys parents and grandparents went to Chicago for a Blackhawks hockey game. Now have any of you ever called your grandkids monkeys? Well just look at Layla's feet  holding her drink as she uses her hands for a bag of treats.  So funny, she's a monkey .:) 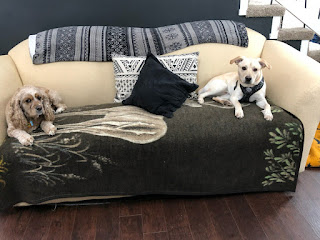 The boys brought their dog Madison over with them. She is on the left and maybe not so cozy with Bennie, Layla's doggie. It was way too cold for animals to be outside without a heated house. These are inside dogs.
Dear friends, I thank you for all the wonderful prayers and well wishes.  I am asking you to please continue to pray for Teddy. He is truly a good man with a kind heart. Would do anything he could for anyone. :) Thank you for your kindnesses. XO
Posted by Susie at 8:19 AM 81 comments: 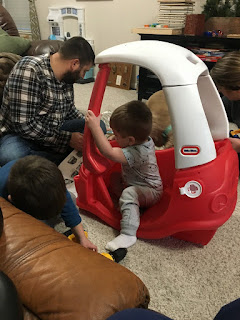 Great grandson Luke got a new car for Christmas. He was all over it while his dad Mark tried to get it assembled. So funny. 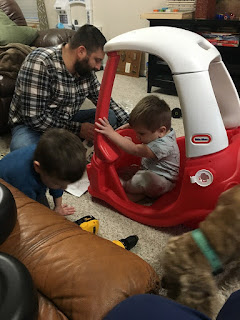 Even Max was checking out the tools . 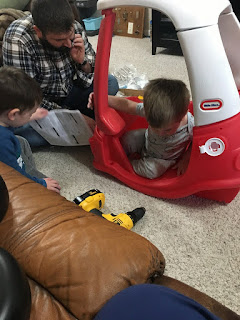 The instruction also. Looks as if dad has his hands full. 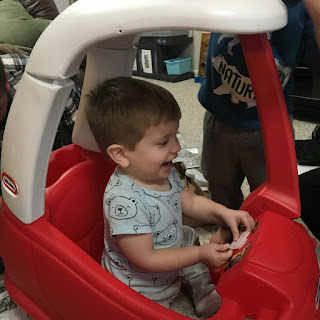 Luke just seems so happy and enjoying it all. 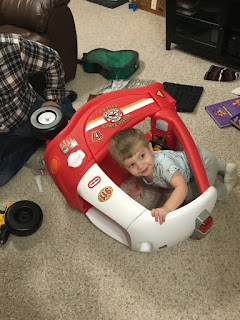 While Mark is trying to put the wheels on, Luke crawls in the window. LOL 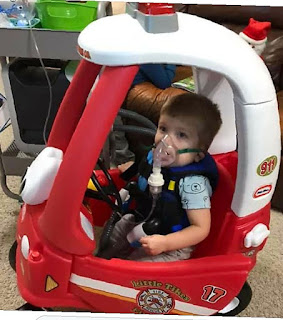 When his little fire dept. car is done, it was time for Luke to have a treatment for his C.F. 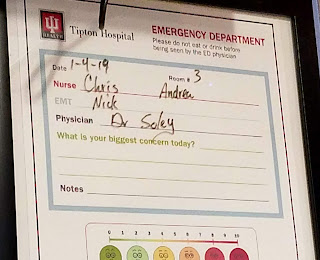 Update on Ted. He had his second round of chemo..two hour drip twice a day 12 hours apart. for 5 days. A day of rest and they sent him home on the 1st of Jan.  He was not in any good spirits or feeling well . On Friday he was to have the first of 208 blood works for the year. I got him to the hospital got the blood work done stat.  Once I get Ted home, I take his temperature and give him his morning meds. His temperature was 99...that did not worry me too much.  But I knew to check it again to see if it would be climbing.  He did not want to eat, did say he wanted some coffee...took one sip and said he felt sick to his tummy.  I gave him nausea meds that he was prescribed.  20 minutes later...I took his temperature and it was 102 point 4.   That made me almost panic. So I get him in the car take him to Tipton's hospital ER dept. 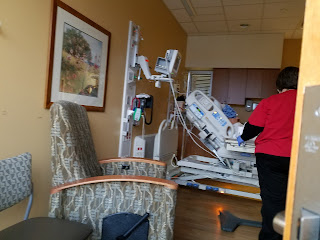 They admit him because his blood work was done and not good numbers.  After about 2-3 hours in ER they transfer him to ICU. They give him platelets and antibiotics. His fever is up and down. They transfer him by ambulance to Indy to the St. Vincent's that had just sent him home 4 days earlier.
He is now on the oncology floor . He has some infection that all the drs. can't seem to narrow done to were it is coming from...as possibly his own gut...as chemo can do that.  Now he is into the diarrhea again.  Not wanting to eat  and not enough rest.  The only good thing about all of this...he is still in remission.  I am asking all of you to please keep Ted in your good thoughts and prayers. I am so grateful for each of you . I wish you all blessings. XO
Posted by Susie at 7:51 AM 79 comments: