Some Times One Thing Leads To Another...... 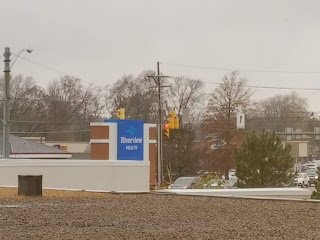 Thursday morning we were up early...to ice and snow. The day we need to get to the hospital for Ted's heart catheterization it was totally winter.  Our road was the worse part, a bit nasty on a secondary road, then clear sailing . We arrived 10 minutes early and they got right to work on Ted. 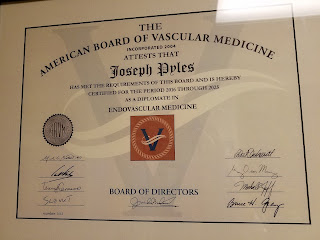 Ted's heart doctor is so busy he "farms out" his cath jobs. This is the doctor who did the cath. A crew of nurses. I was amazed. One nurse says, "I know you ", to me.  She used to live near my daughter and they were  and are friends. So she kind of  looked out for us. 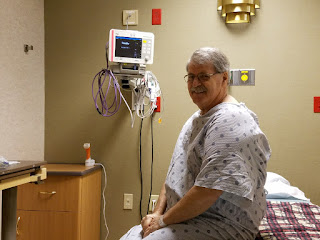 Here's Teddy sporting one of those flashy (or should I say flasher) gowns.  He had fasted and keep talking about food. :)  The nurses got him ready and they started the procedure. Waiting, as you all know is very hard. My daughter and her husband were with me. I was so thankful  When the cath was finished, we all were called for a consultation....this was the part I had been dreading.
The doctor said Ted had a blockage, but he did not take care of it because Ted's hemoglobin count was so low, it was dangerous. So he was admitted to the hospital for treatment. 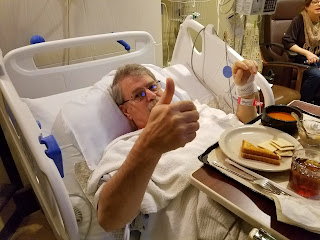 Waiting for doctors to come and decide what needs to be done...23 hours of fasting, Ted gets a grilled chees and tomato soup, tea and pudding.....he was so happy. My daughter Kathy came after she got off work. it's nice to have others keep your mind off some of the scary stuff. 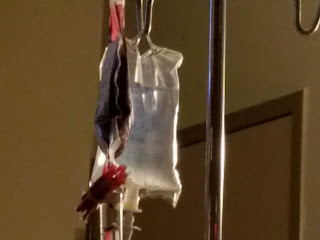 Eleven hours after coming to the hospital...Ted is getting two units of blood.  They took vials of his blood and spun the red blood cells out and mixed with donate blood and hooked Ted up ( this is what I seemed to be hearing, so don't call me on it, if I am wrong, Ha. ).   His hemoglobin was  5 point 5 ,it should have been 14.  By Friday morning at 4:00 am, the transfusion was done and the nurse got him up ...we took a couple laps  around the ward..they wanted to see if he was feeling better and get that blood flowing.  The night shift nurse  was wanting him reading for a better reading at the morning blood draw.  He was up to 7.8 by then. Not perfect but out of danger. 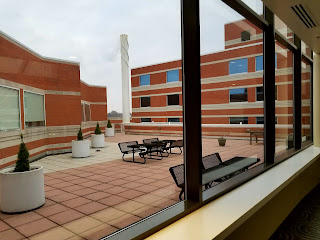 They took a bone marrow biopsy Friday at 10 :00... The results will not be in for a few days. We will be seeing an oncologist/hematologist , once the results of the biopsy are in.  Trying to find out why Ted was anemic. All the nurses and doctors could not believe he had great color, a good weight, passed the treadmill, great bloodwork.( do not think he was tested ever for hemoglobin count.) but all the other tests were great.  One doctor asked if he walked into the hospital...Ted said, "I drove to the hospital !" so all were amazed by him.  I am praying  his all around good health and strength will get us thru . He will be getting a stent for that blockage ...after all other things are done.  Please hold us in your good thoughts and prayers. I am thankful for all of you.  XO.