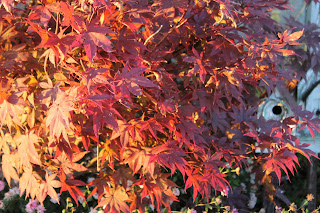 Our Japanese maple is a pretty little tree . It's red and yet when it's autumn it gets a different shade of red. The setting sun lights it up. 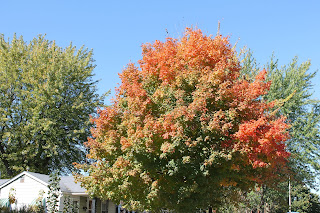 There's some pretty changes going on in our area.  Not yet peak season for fall color, but getting there. 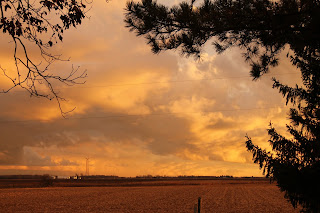 Bright and firey skies late in the day.  We have had beautiful clear skies and some cloudy one also. The air is much chillier. Frost in the mornings. 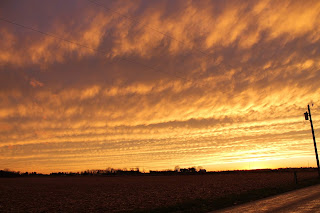 This is an up date on Ted's doctor visits. We when to the bone marrow dr this week. He lower one of Ted's meds. Took the picc line out, so glad about that. Ted's blood work showed his counts are up again. We do not go back there for two weeks, unless something should change.
We also went to see Ted's heart doctor. The one that put a stint in Ted's heart almost 20 years ago. He went over Ted's med sheet and cancer/bone marrow records. Thoroughly examined Ted  and set up a Doppler of Ted's heart at the hospital two blocks away. We go get the Doppler and the nurse says it looks very good, and tells us we can leave now.
We go have some lunch then come home. Once we get home the heart dr's office calls and says we need to go back they did not do the other test the doctor wanted done. Ted tell them I'll come back tomorrow , set it up. then  the heart doctor's office calls and says that another exam will be set up at a totally different Heart Center near Indianapolis, in Carmel.  So we are waiting for that test to be scheduled and then we go from there. The Doppler showed that Ted's heart squeeze is back to where it was before all the chemo  and that is good news. The heart doctor wants the extra tests done to see if there has been any scarring of  Ted's heart muscles. Wish we could get a break from all the doctors and tests .
Thank you dear blog family and friends for all your kind words and prayers. XO
Posted by Susie at 5:12 AM