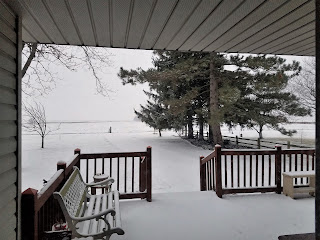 Woke up to this on Wednesday. Got busy sweeping the porch and shoveling the drive.  We had about 4 inches of snow. Thankfully nothing like the northeast has and is getting. I am praying for all of you. Have seen some scary news reports this morning.

Ted called from the hospital and they were ready to release him to come home. Gee, doesn't that stand to reason...snowy out, no plows had gone down our road, school was cancelled, so send Ted home.  Since school was cancelled I called my daughter and she said she would pick ted up and bring him home. I said he will need some clothes as he said his were not to be found. Angie gets in her son's closet and picks some clothes for Ted to wear home , so she doesn't have to make two trip out to the country.

Ted is released with a small oxygen tank , nebulizer, and breathing exercise things. I have never been around anyone on oxygen and had no idea how things work.  The drs. had ordered meds to put in the nebulizer, a steroid to start tomorrow, and another antibiotic for a week.  I called CVS to see if those orders were called in, yes they were ,but the nebulizer meds was not coded for medicare to pay for it.  The pharmacist, worked with me so that I paid for a week worth till possibly getting the drs to do their jobs of coding.  So called Angie again and she picked up the meds for us.

I got to thinking if they have not coded the meds right....is the company that was to bring Ted's oxygen equipment , really bringing that??? So I actually was on the phone for 4 hours to get that working right. Why do I have to do this when it is up to the professionals . I will tell you it makes me crazy. I call the third floor nurses station to see if they had it coded right....the nurse says if Ted runs out of oxygen bring him to ER....Really?? Sorry to be complaining but I just need to vent somewhat.

I did get in touch with the oxygen supply company and they found the order on the back side of the nebulizer order....which he said should not have been there. He told me to hang on and he found that the delivery driver was in the town north of here. So by 8:00 P.M. the young man had Ted all hooked up to the oxygen concentrator. He brought some tanks also, in case of power outage. He showed me how to use those. Hooray !! 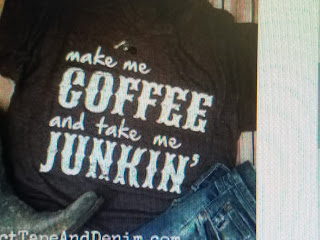 When all the craziness of the covid , Ted's pneumonia, and now winter is over....this is what I want to do, as soon as we have some peace. :)  Take care everyone . Be safe. XO