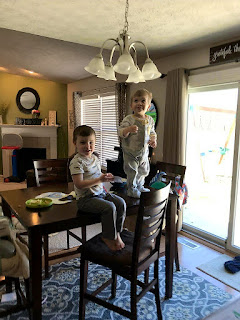 See what little boys will do when mom goes for a potty break. Yikes !! Click on the pictures to enlarge. I hope you can see their faces. 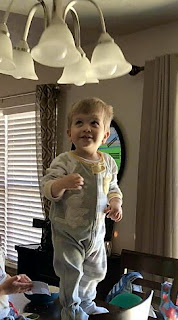 I enlarged the picture to see what Luke was eye balling.  My daughter Liz( Gigi to these boys) Said he was thinking, "I could jump up there, no problem. " LOL 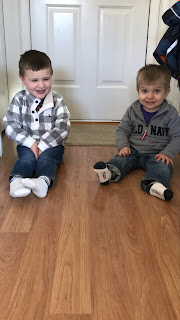 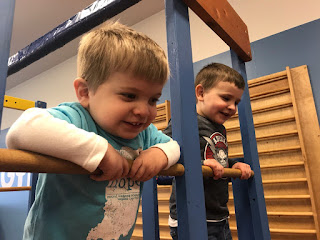 But most times they are.  They are  at their gym here. 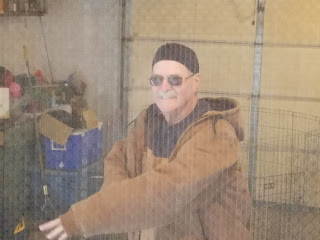 Speaking of boys.... Here's Teddy suiting up to run the log splitter , at my daughter's last week. I think this may be where we got sick. 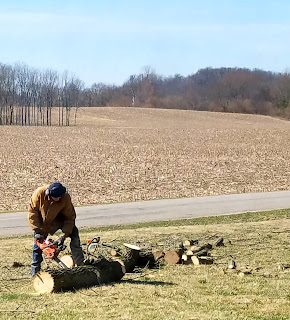 Mic (Ted's brother) chunking the tree into manageable pieces. Matt and Mic cut the tree and piled branches. Ted ran the log splitter as each of them placed a chunk of wood on it. Mic took a load of ash to his workshop.  Liz and Matt have many ash trees and Indiana was hit by the Emerald Ash Bore , which has destroyed most, here in the state.
This is the latest happening here.  Ted saw his Hematology nurse practitioner on Monday. She said he had bronchitis and wrote a script for an antibiotic....which the bone marrow nurse navigator said he could take. Then when he called the nurse navigator yesterday, she told him she had postponed his all testing that was scheduled for today till next week. Giving him some time to get better. Then he is scheduled to see his cancer doctor after that. Still getting labs every Monday-Wednesday- Friday.  To make sure he is in remission.
Tuesday we were both very sick, his bronchitis and my head cold. We called the insurance adjuster to cancel them looking at the roof.  But Wednesday that young lady came out and looked at the roof and thankfully the insurance is paying half of the price of a new roof. That was good news for us. See on top of health issues , house issues still come about. I need a  vacation  :(
Wishing all of you a sweet spring day. XO
Posted by Susie at 4:28 AM