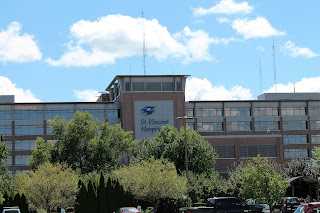 This is the St. Vincent's hospital in northern Indy. Ted and I went to a small birthday gathering at the hospital for his brother Cliff. 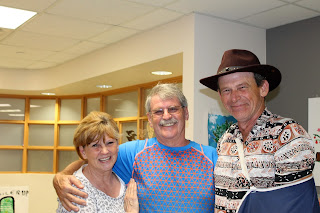 This is Ted in between his sister Dorothy and his little(taller) brother Mic.  Seems Mic torn a tendon in his shoulder. 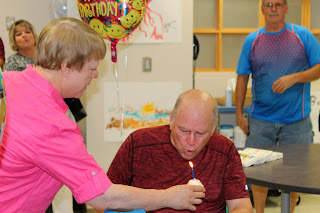 There were cookie for guest.  Linda had a cupcake for Cliff to blow out a candle.  Which was a bit of therapy for Cliff, it was an effort for him. Linda is a strong woman and I think she  will need to me.  She told me Cliff's therapy was brushing his teeth and bathing, getting dress. His speech is  amazingly good, he searches for words at times. I think his right arm is going to need lots of therapy. 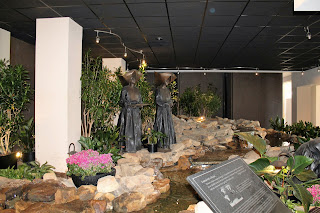 This is the lobby at the hospital. Water features and plants and lots of statues . 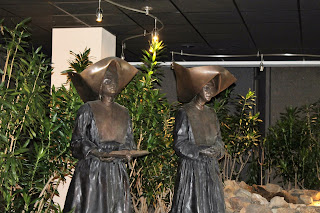 The statues are what I call flying nuns...as I do not know the name of that order of nuns. 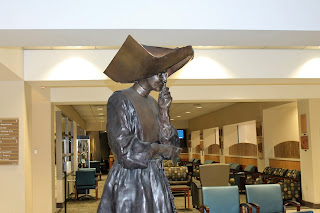 I think there's 5 of these among the garden area. 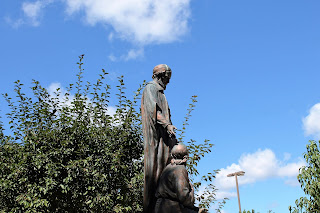 This is a statue of St Vincent. It's out front.  This is a very well landscaped  entrance. We stayed about an 1 1/2 , visited with family and church friends of Cliff's.
The good news of the day , Cliff is going to a nursing home near where he lives . He's just thrilled to be closer to home.  My daughter Liz works at the Alzheimer's unit at this nursing home. When we visit Cliff , we can see Liz the same day. :):)
We had cooler weather this weekend. This morning it is 55 degrees , at this time. That is nice...no AC running.  Wishing all a great new week. XO
Posted by Susie at 4:49 AM