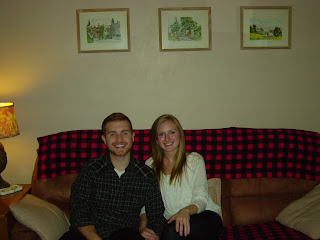 This is my grandson Korey and his fiance Ashley. Korey graduated from the University of Utah, with his degree in GIS.  He also has a degree from Ball State in meteorology. I always thought with that smile he'd be a great weatherman on television. But he liked the behind the scenes action of tracking storms. So he got into the GIS programs....which honestly , I think has to do with mapping. I do not know enough about it to go into details. He's been out of school about two months. He landed a job about the end of his first month of graduating. It's   a great job with good pay and benefits. The official title is,  Data Infrastructure and Visualization Manager. It's in SLC....I won't say the name of the company, I don't want to tell all. I have to say I am so happy for this young man. He's a wonderful grandson with a good heart.
His fiance Ashley, has had the job she wanted for about a year. She's a fashion designer of wedding gowns and prom attire.Two very hard working young people. I think there may be a wedding in our future. :):)
I want to thank all of you who wished Korey well during his studies. Jann at  Have a Cup with Mrs.Olsen, gave me her phone number, when Korey started school at the University in SLC. She said he could call her in an emergency....can I tell you, that alone made me feel better about Korey being that far away. So many beautiful bloggers out there. Thank you Jann. xo